Book Blitz & Giveaway for Prime Vector by Diana A. Hicks 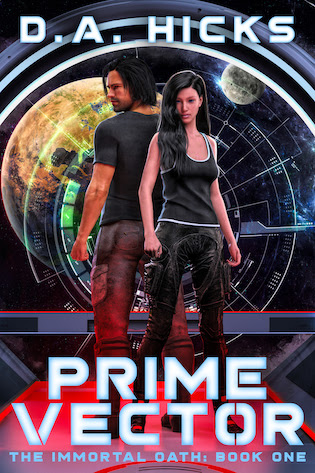 If you like immortals in space, romance, and fast-paced thrilling action, you’ll love Prime Vector!

During a routine tour to Earth, first-year cadet Catita witnesses the murder of her immortal twin. To unravel the mystery behind her sister’s death, Catita will have to assume her sister’s identity and join the dreaded Forever Queen’s immortal army.

Tek, a mercenary from Earth, has finally found a way to save his sister from a terminal illness. That is, if he’s willing to pull the heist of his life: kidnap the Martian princess in return for his sister’s cure. But the princess has a mission of her own and leaving Mars isn’t an option.

As both Catita and Tek struggle to do right by their loved ones, their paths cross and they soon find themselves in the middle of a century-old feud to control the virus that gives its host immortality.

Are you a book reviewer?
Request an ARC here!

Tek disappeared into the dark storage room. A gust of wind lashed down the narrow hallway, carrying a small trace of his scent—a mix of ocean breeze and sweat. Smiling, I stared at the dilapidated red door, breathing him in, memorizing every detail.

Downloading to Earth hadn’t been a mistake. I was glad to have met him. The guy from my dreams had turned out to be way more than I thought. He was brave and kind. The best part was he didn’t die today, as he had in my nightmares. I made a mental note to ask Ry if she was sure she’d never seen him. Why else would Tek be in my head? Ry messed with my thoughts on a daily basis. Maybe Tek had been a residual afterthought.

Immortality and the virus had been around for over one hundred years, but we still didn’t know everything about it. Ry and I were Wela’s guinea pigs. Since we were little, she’d been impressed by how well Ry’s compulsion worked on me. She figured it had to do with the fact that we were twins.

“First-year,” Captain Weston called out to me.

Time to go home, but first I had to deal with the consequences of everything I’d done tonight—sneaking out of the Epoch, riding in a vehicle next to Ry, sailing across the bay with Tek, and saving Ari. No, I wasn’t sorry at all for any of it. I wasn’t sorry for wanting more. I pursed my lips to chase the grin off my face before I turned to face Captain Weston and Ry.

Mak had already left the bar, and all the commandos kept busy outside searching the marina. At least we were alone in here, and I wouldn’t be getting my ass chewed out in front of Ry’s entire unit. Thank the Titan for small favors.

The wide gash on Ry’s temple dripped with her silvery blood. It glittered and bubbled before it healed completely. The process was so fast it was as if I had imagined her wounds, though looking around the room, I knew that wasn’t the case.

Ry stood tall, oozing strength and confidence. Her shiny hair draped her shoulders, framing her pink cheeks as if her face were a work of art. After tumbling around the dirty floor of the bar fighting Mak, Ry should be covered in cuts and scrapes, but she wasn’t. Captain Weston and my sister made quite a pair—flawless, impossibly beautiful, and lethal.

Captain Weston’s intense blue eyes under thick brows regarded me with the same disdain as the rest of Ry’s unit. He pressed his lips together, and his strong jaw flexed. For a beat, I imagined running my hands through his blond hair. It looked so soft and shiny, like strands of gold. Suddenly, it didn’t seem so bad to be killed by someone as handsome as him.

Wait, what? What the hell? 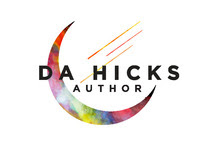 D. A. Hicks is the alter ego of Diana A. Hicks, an award-winning author of steamy romantic suspense and science-fiction romance.

When Diana is not writing, she enjoys hot yoga, kickboxing, traveling, and indulging in the simple joys of life like wine and chocolate. She lives in Atlanta and loves spending time with her two children and husband.

Connect with D.A. Hicks on social media to stay up to date on her latest releases.