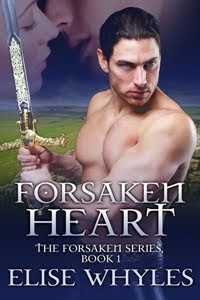 Punished for sins not her own, can a mortal claim her vampire mate?

The world of immortals must unite to save both themselves and the mortals they co-exist with from an ancient evil.

For Bede MacTaggert this means trusting in the warrior sent for her sister—a man of mystery, of power, and one who could easily sweep her into a world she's destined to be part of.

An imperial guard to the king of vampires, Gawain has always tuned out the needs of the flesh. Dedicating himself to the service of the royals, he's lived on the fringes of his people for centuries. Now he's forced from the shadows and into the arms of a woman who will awaken his heart and body to a passion unequaled.

Read an Excerpt:
Bede gasped at the touch of his hand. Her eyes widened, and the fire coursing through her veins throbbed to life. Heavy, full, her breasts ached beneath the fabric of her dress. She could feel a hollow throb between her legs, a hunger building. Her eyes darted to his, and she recognized the feelings in his gaze. Lust flared, hotter, stronger than any desire to feed any morality. Leaning closer, she trailed a finger down his face, her nail gathering blood.

Slowly, her eyes locked to his, she lifted her bloody nail to her lips and sucked, a moan of pleasure echoing on the night. His eyes darkened, lips curling up to reveal his extended fangs. The pounding of his blood echoed in her head.

With a groan, she grabbed the front of his tunic, her lips crashing into his. Clumsy, untutored, her tongue traced over his lips, demanding entrance. When he gasped she took full advantage, her tongue darting past his teeth to duel with his. Scrambling closer, she pressed against him, her hands tangling in his hair, tracing his shoulders, his neck. Again and again she kissed him. Her body on fire, shuddering and moaning with each response from him. Her blood pooling with each caress, each brush of his tongue against hers.

“Gawain, please…” Whimpering, she threw her head back, exposing her throat, desperate for him to sink his teeth into the flesh there. Pressing his head downward, she guided him toward the throbbing pulse of her life’s blood.

“Nay, nay, we cannot.” Gawain licked, suckled, his muted protest at odds with the way his hands palmed her breasts, teasing her nipples into hardened peaks. “Bede, stop. Gods above, stop me…”

“No, take. Drink.” Bede reached up to scratch at her throat. “Take what you need. I am yours.”

Screaming in pleasure, she shook when he sank his teeth deep. Her body trembling, every nerve alive, the pain bordered on pleasure and she writhed against him. “Yes!”

Pressing closer, she licked her lips, her head shifting, resting against his shoulder. Her hand darted down his body, her fingers seeking the waistband of his trews. His fingers, rough and calloused, grabbed hers as she palmed his hardened cock.

“Nooo, let me.” She whimpered, her eyes rolling back in her head as darkness swam within her vision. Each pull on her throat echoed in her womb, and she hovered on the brink. Clinging to him, she pressed closer, tighter, the need to share beyond any control she had.

Stars exploded behind her eyelids as he lapped at the blood oozing from the wound. Already she could feel her body hovering, waiting on the precipice. She flew apart when his fingers touched her bare skin, the nails scoring the insides of her thighs before he cupped her womanhood. Arching her hips into his palm, the friction against her clit shattered her. Screaming out his name, Bede fell into the darkness that hovered around her. Whole, fulfilled for the first time in her life.

Born in Northern British Columbia, Elise is a small-town girl. She writes in a variety of genres including paranormal, contemporary suspense, m/m in various lengths. Currently, she lives in British Columbia with her husband and son, one dog, one cat, and a gecko. Elise enjoys reading as much as she does writing, with some of her favorite books being read until they fall apart.
She is currently working on the next book in the Forsaken Series, Burning Rain. As well she has a new contemporary she’s working on. For more information on Elise, or to check out her books you can find her on Facebook, twitter, and her website.