Book Blitz & Giveaway for Bound by Deception by Trish McCallan 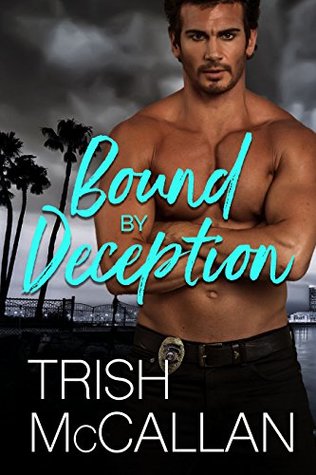 
He broke her heart. She twisted his mind. But in this game of love, nothing is quite as it seems…
Rebecca’s life is haunted by unexpected tragedies. Her lover left her when she least expected it, and her mother’s suicide took everybody by surprise. But when a recent inheritance reveals a secret, Rebecca discovers her mother’s death was actually a cold-blooded murder…
Dante “Rio” Addario swore off his irresistible ex and her web of lies 12 years ago. But the former Navy SEAL turned police detective can’t ignore Becca’s plea to re-open an old case. As he and his ex team up, they discover missing evidence, tight-lipped detectives, and the conspiracy that tore them apart over a decade ago…
With everything they believed thrown into chaos, Rio and Becca can’t ignore their reawakened desire. But if they don’t solve the case soon, the real killer may just finish the job and their love story…
Bound by Deception is the pulse-pounding third book in the Bound By series of romantic suspense novels. If you like simmering chemistry, chilling mysteries, and second chances, then you’ll love Trish McCallan’s twisty tale.

Goodreads / Amazon
—
EXCERPT:
“Grab the door,” Rio said in a calm voice, his gaze flickering toward her.
“Sure.” Becca grimaced at the faintness of her voice, wishing she sounded as calm and casual as he did. But then he was probably used to being shot at—first as a Navy SEAL, then a police officer and now a detective.
Good God, his career choices practically begged for late afternoon shootouts, followed by cruising speeds of over a hundred miles an hour.
“Becca—” He shot another quick glance at the yawning abyss along her right side.
“I know. I know. The door!” She blew out an aggravated breath.
She anchored herself in place by grabbing the edge of the seat. Without looking down at the endless ribbon of black whistling below her, she leaned outside the cruiser far enough to grab the door handle. The agony pulsing across her shoulder escalated to knife jabs and volcanic lava as she struggled to pull the door toward her. When it finally clicked into place, she groaned in relief and collapsed into her seat.
Sweaty and shaky, she looked down at her right shoulder. Had the door’s impact broken a bone? Was that why it hurt so bad?
Queasy joined sweaty and shaky when she caught sight of the moist, red fabric of her blouse. Fabric that used to be white. Her gaze dropped to her right hand and the crimson beads that dripped steadily to the floor.
A broken shoulder or arm wouldn’t bleed. Would they?
She scanned her left side again. Nothing looked bent, or broken, or out of whack. It just looked bloody. Maybe the edge of the door had sliced her skin…but she didn’t see a rip in the fabric of her blouse.
High on her shoulder, though, just below the fleshy, curve, she found a blood-soaked, frayed hole in the fabric. A bullet sized hole.
Bullet wounds bled like the dickens. She knew that from the movies.


Trish McCallan was born in Eugene, Oregon, and grew up in Washington State, where she began crafting stories at an early age. Her first books were illustrated in crayon, bound with red yarn, and sold for a nickel at her lemonade stand. Trish grew up to earn a bachelor’s degree in English literature with a concentration in creative writing from Western Washington University, taking jobs as a bookkeeper and human- resource specialist before finally quitting her day job to write full time.
Forged in Fire, the first book in her Red Hot SEALs series, came about after a marathon reading session, and a bottle of Nyquil that sparked a vivid dream. She lives today in eastern Washington. An avid animal lover, she currently shares her home with four golden retrievers, a black lab mix and two cats.