Cover Reveal & Giveaway for Once Upon a Time by Blair Babylon


When a real princess falls in love with a man who is definitely not a prince, a royal fairy tale turns dangerous.
ONCE UPON A TIME, there was a beautiful princess, Flicka von Hannover, who lived an enchanted life. She jetted around Europe staging charity events with friends, had married a handsome prince in the most spectacular royal wedding of the 21st century, and should have lived happily ever after.
But then she found the handsome prince in bed with a duchess. And then a coffee shop barista. And then her own goddamn secretary.
Finally, the beautiful princess had had enough of the cheating prince, and she ran away.
Once she had stepped out of the royal fairy tale, life became grayer, grittier, and rougher. The prince didn’t like that she had left and sent henchmen to take her back to the castle. Her worried royal brother sent people to look for her, too.
But the princess didn’t want to be found. The princess got a job as a waitress in a diner in New York City and made her own way in the world. Even cut off from everyone she knew, she was more resourceful than she had thought she might be. She did okay. From hiding, she sent legal separation papers and then divorce documents, but the prince wouldn’t sign them. He said he wouldn’t let her go. Even in these modern times, the prince could lock the princess up in a dungeon of legal forms and provisions that she wouldn’t be able to break out of. The prince wanted his princess back because he couldn’t take his throne without her.
Until a man walked into her diner one day, one who was frankly not a handsome prince.
He was the last man on Earth the princess should have fallen in love with. 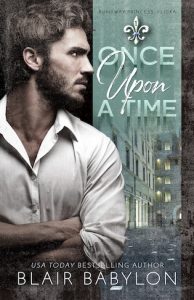 
USA Today Bestselling Author Blair Babylon is an award-winning author who regularly publishes contemporary romance and romantic suspense fiction. After writing literary fiction where reviews usually included the caveat that there was too much deviant sex, she decided to abandon all literary pretensions, let her freak flag fly, and write hot, sexy, erotic romance with crazy, breakneck plot turns.
Copy/paste this link into your browser to sign up for email alerts about new releases, special sales, and free ebooks: http://smarturl.it/Babylon-Email . Blair sends out chatty, fun emails with great deals. Hey, she's a reader, too, and she understands that it's hard to find great new writers to read and harder to find great freebies and deals.