You’d think I’d be used to interviews, since I’m a regular on the Extra Extra Ordinary Podcast. But it never gets less nerve wracking. Butterflies for days before sitting down and switching on my mic.

Okay, things you learn about me in Burned…  You get to meet one of my foster brothers. The protector of my old home.  He’s amazing. You’ll love him.  I know I do.  I guess I’m doing a lot of that recently- opening myself up to love.  Even more terrifying than podcast and interviews.

Sarah and I slammed into each other when I was kidnapped in the sixth book of her Honey Pot Mystery Series.  (Write and Wronged) Thanks a lot, Sarah. (Not really)

Sarah insists on sticking me in situations “normal” people would run from.  And then she leaves it to me to unravel her mess and save the day.  Thank goodness I have Spades, my cat, and Titus my…  er… friend.

I ask myself this every day. Why are people so intrigued by the weird and macabre?  I mean I’m literally stalked by the omen of death.  Who would want to read about that? Not me.  It’s more than a little scary. But then again, it’s the only life I know.

My favorite character? Spades my quirky cat. He’s my only daily companion.

The RAVEN!!!!  If that stupid bird would stop stalking my friends and acquaintances maybe I could have normal life.  No more mysteries. No more death.  Then I wouldn’t be afraid of finding my sister or …  falling for …  my crush.  But no… the omen follows me EVERYWHERE!

That’s a question for Sarah… I guess.  My personal plans include finding my long-lost twin sister and avoiding death – mine and other peoples.  But I’m sure Sarah has other plans.

About Burned: Death Plays With Matches 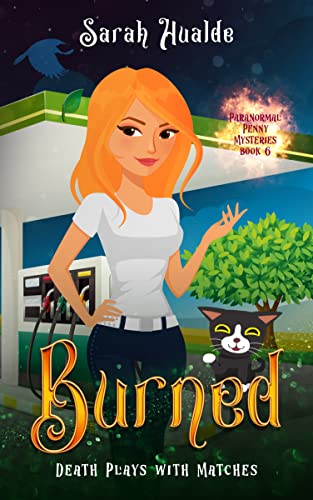 …she discovers a hidden plot.

As a deceptive advisor is snuffed out.

Penny Nicols brings her “gift” to Billington. Searching for her sister, she’s determined to stand her ground. One woman holds the keys to Penny’s link between her past and the present. When is history better left buried?

When the Raven is the one telling the story.

Dinah, Penny’s old advocate, is struck down before her eyes.

Penny’s long-distance friend T.C. continues to help her trail the whereabouts of her long-lost sibling and solve the mystery. Musical clues and manic relationships crowd the distracted Penny as T.C. supports her from afar.

Spades, the cat, charms the suspects as Penny untangles her omens.

Dinah may be victim number one, but Penny fears the Raven is just warming up.

You’ll love the sixth book in this binge-worthy paranormal mystery series because Penny and her sleuthing sidekicks dig deep to uncover the Raven’s evil plans.

REVIEW
*I received a free copy of this book which I voluntarily chose to write an honest review for.
This is such a fun read! I am new to the series but I am hooked none the less. We follow Penny who has quite the gift whether she wants it or not. She is stalked by the raven who loves to mark people before they drop dead. Having no control Penny goes along though this does make it very hard to stay in one location. Always on the move she helps investigate when she can especially if there may be clues to her hidden past. Creates quite the interesting read as the story plays out. A very unique premise I must say. I really liked it so I give it 4/5 stars. 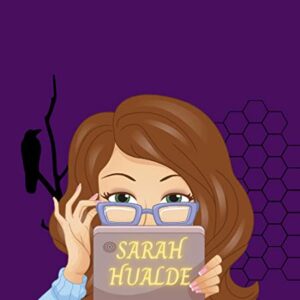 Sarah lives in California, in a home that brings her happiness and hay fever. She loves God, loves her family, and loves freshly brewed coffee. She has a husband who cooks, a son who stop animates, a daughter who loves animals, a dog that follows her everywhere, and a turtle who scowls at her condescendingly.

Her mother raised her on Mary Higgins Clark, Diane Mott Davidson, and Remington Steele. Her grandmother shared True Crime stories with her as they plotted how to get away with the perfect murder. It's no surprise that Sarah became an award-winning spinner of suspenseful tales brimming with quirky characters. Mysteries are in her blood. Not that she could survive one of her own stories. She confesses, "I'd be snuffed out by chapter two."