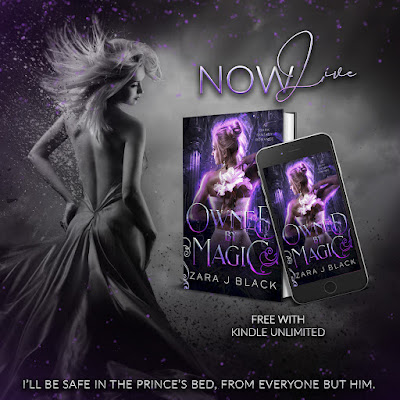 .
Owned by Magic
I'll be safe in the prince's bed, from everyone but him.
I stole from a brutal street gang, and now they want me dead. There’s only one place they can’t touch me. The palace. But safety comes at the cost of my freedom. I'll sell myself as a courtesan, serve for five years, and leave with enough money to pay my debt.
Crown Prince Adante wields his power like a knife, and when his gaze turns my way, I know he could destroy me. An innocent mistake earns his attention—along with bruised knees and a painful punishment.
I should listen to the others. I shouldn't catch his eye again. But I've always courted danger, and in the prince, I see a chance at power and revenge. He loves to gamble—sadistic games of pleasure and pain.
All I can wager are my body, mind, and soul. And I play to win.
Owned by Magic is a dark fantasy romance intended for an adult audience.
.
𝗥𝗘𝗔𝗗𝗬 𝗙𝗢𝗥 𝗠𝗢𝗥𝗘 𝗠𝗔𝗚𝗜𝗖?
Preorder 𝗝𝗼𝗶𝗻𝗲𝗱 𝗯𝘆 𝗠𝗮𝗴𝗶𝗰 (𝗥𝘂𝗹𝗲𝗱 𝗯𝘆 𝗠𝗮𝗴𝗶𝗰 #𝟯) → https://books2read.com/RBM3zon
REVIEW
*I received a free copy of this book which I voluntarily chose to write an honest review for.

This may be book two in a series but it works as a standalone as we follow a different couple this time though there are references to the couple from book one. Talia has found herself in a difficult situation. She did something bad and is now being hunted. To save herself she accepts a place as a Courtesan in the palace. If she makes it five years she is free with enough money to pay her debt as well as create a new life some where else. The last thing she needs is the attention of the Prince but that does not stop her from being intrigued when she catches his attention. This leads to quite the romance I must say leading to a surprising conclusion. I cannot wait to see what happens in the next book. Makes for quite the fun read. I really liked it so I give it 4/5 stars.
.