I am thrilled to be hosting a spot on the KENZIE'S KINGDOM by Shea Fontana & Agnes Garbowska Blog Tour hosted by Rockstar Book Tours. Check out my post and make sure to enter the giveaway! 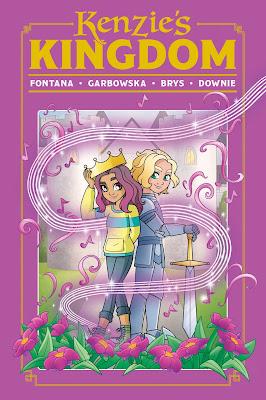 When modern meets medieval, Kenzie must help a squire get back to the past in this time-traveling fantasy adventure!

A DIFFERENT KIND OF PRINCESS

Kenzie hates that her family moved to a castle to start a Medieval-themed resort, but all that changes when a time-traveling squire needs Kenzie’s help to get back home to the past! From the best-selling creative team behind DC Superhero Girls, this is a perfect read for fans of Phoebe and her Unicorn, The Baby-Sitter’s Club, or Witches of Brooklyn.

REVIEW
*I received a free copy of this book which I voluntarily chose to write an honest review for.
This is an adorable new read. We meet Kenzie as she is attempting to settle after her family made a really big move. She is struggling to accept herself when she accidentally activates a time portal that brings a medieval knight to her time.  Kenzie tries to keep him a secret at first but then her siblings find out so working together they help train him so he can be ready when he goes back. At the same time he helps Menzies learn to love herself making for a great lesson for them all. With colorful artwork and a wonderful lesson worked into an interesting storyline we get a highly enjoyable read sure to delight younger readers. I really liked it so I give it 4/5 stars. 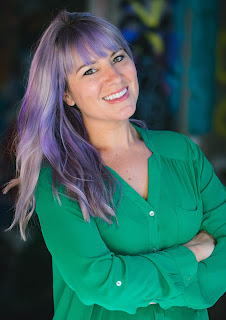 She lives in sunny Los Angeles where she enjoys hiking, hanging out with her beagle, Ziggy, and changing her hair color. Using the secret identity “Shea Q. Off,” Shea played roller derby until her angry knees forced her into early retirement. 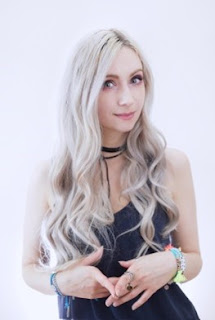 Agnes has worked with many of the major comic book publishers illustrating such titles as the New York Times Best Sellers & Gem Award winner DC Superhero Girls for DC Comics, My Little Pony, Care Bears, and Jem and the Holograms for IDW, Grumpy Cat, Boo: the World's Cutest Dog, and Li’l Vampi  for Dynamite Entertainment, Sonic Universe Off-Panel Stripes for Archie Comics, and Victories for Dark Horse. She has worked with Marvel Comics, providing artwork for Girl Comics and Spider-Ham 25th Anniversary Special. She is also the artist for the 2014 Halloween Comic Fest comic, The Adventure of Ernie from Aspen Comics.

Giveaway Details:
2 winners will receive a finished copy of KENZIE'S KINGDOM, US Only.
a Rafflecopter giveaway