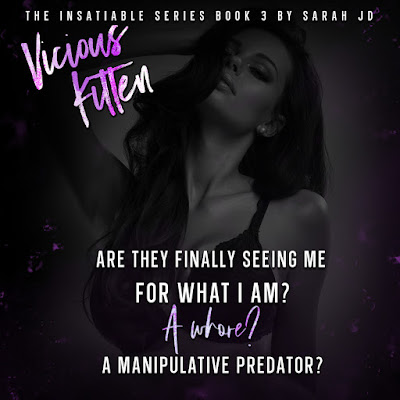 𝐀𝐝𝐝 𝐭𝐨 𝐓𝐁𝐑 → https://bit.ly/Kitten3TBR
.
↓ 𝗛𝗔𝗩𝗘 𝗬𝗢𝗨 𝗦𝗧𝗔𝗥𝗧𝗘𝗗 𝗞𝗜𝗧𝗧𝗘𝗡'𝗦 𝗦𝗘𝗥𝗜𝗘𝗦 ↓
https://books2read.com/Kitten1books
______
𝗔𝗿𝗲 𝘁𝗵𝗲𝘆 𝗳𝗶𝗻𝗮𝗹𝗹𝘆 𝘀𝗲𝗲𝗶𝗻𝗴 𝗺𝗲 𝗳𝗼𝗿 𝘄𝗵𝗮𝘁 𝗜 𝗮𝗺?
𝗔 𝘄𝗵𝟬𝗿𝗲?
𝗔 𝗺𝗮𝗻𝗶𝗽𝘂𝗹𝗮𝘁𝗶𝘃𝗲 𝗽𝗿𝗲𝗱𝗮𝘁𝗼𝗿?
______
↓ 𝐁𝐋𝐔𝐑𝐁  ↓
𝗜 𝗮𝗺 𝗞𝗶𝘁𝘁𝗲𝗻. 𝗛𝗲𝗮𝗿 𝗺𝗲 𝗽𝘂𝗿𝗿!
Secrets never stay secret. One way or another, they come out and bite you on the arse. Un-f%cking-fortunately for me, I have too many, which just means shit is about to get real.
While I try to make a relationship work with my group of guys and my teacher from school, secret after secret gets exposed. Some I wanted to keep hidden, some I reveal as payback, and some that aren’t my secrets to tell but feel caught in the middle of.
The problem with exposing other people's secrets is they don’t really like it. So naturally, the human monsters decide to get their revenge on me in the worst possible way. They think they can break me. They think they are playing with a helpless girl, but they are about to get a big f%cking surprise when they find out that this Kitten has turned vicious.
The question is, am I vicious enough to get through what they have planned, or is my seventeen years of life about to come to an end?
It’s a crippling realisation. For the first time in forever, I feel like I actually have something to lose. My guys.
.