Book Blitz & Giveaway for Of Fae & Hate by Quirah Casey 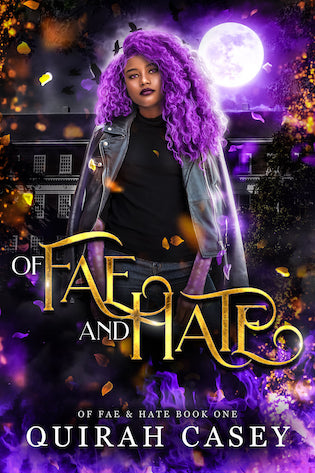 Hate is a strong word, but at the Nadouraz Academy it’s deadly.

I never wanted to attend Nadouraz Academy.
The school for fae is full of spoiled, bratty, powerful royals. I’m none of those things.
Most importantly, no one even knows if I’m even fae.

The first week of school I find myself in a rivalry with more fae than I can keep track of, but it becomes the least of my worries when I end up cursed. What’s worse is that the curse binds me to three fae I hate and one who just may be a demon from the darkest pits of hell: Soskia, Alik, Fox, and Brynsyn.

Now a promise to give the pretentious academy a try, an unbreakable contract, and a wicked curse may seal my death.

I’m halfway to my dorm when I become aware of footsteps marching in time with mine.

I whirl around prepared to give the fox guy another piece of my mind, but I pull up short when I see the guy who’d waved at me the first day I got here.

His eyes are a mystic green that seem to swirl with magic as he watches me. His lips spread into a wide grin, showing off pearly white teeth. He drifts close to me, a chain hanging from his dark jeans. When he stops a foot away from me, my eyes move down to his nails, taking in the black polish covering them.

“Let me guess, you want to take on round three of my anger,” I say to him coldly, preparing myself for another argument.

But instead of saying that I don’t know who he is or one of those other cheesy lines that seem to be in abundance at this school, he only huffs out a laugh. His eyes twinkle as they roam over me. “I’m not here for an argument. I figured I could escort you to your room, keep you out of trouble since you seem to attract it.”

Mirth dances in his eyes.

“Really? Because something tells me you’re the exact type of trouble I need to avoid.” He gives me the classic bad boy vibes and how could he not with his leather jack, dark features, and crooked smile. He’s shirtless under the jacket, but I refuse to let my eyes really inspect all the smooth, toned skin.

“Me?” he asks, placing a hand to his chest. “I’m about as innocent as they come around here.”

“Why do I doubt that?” I ask even as my shoulders relax.

“Because you’re a smart girl,” he drawls, moving close to me until we’re almost standing chest to chest.

Heat swarms my body as I tilt my head back to look up at him. My breath stutters in my chest as his eyes swirl from green to a near pitch black. The sense to run away overwhelms me but it’s battled by the feel to get even closer to him.

I lean closer to him, my mind obviously made up about which side we want to be on.

He chuckles and I feel him reach up and wrap a lock of my hair around his finger. I watch out of the corner of my eye as he twirls the curly, purple hair. He chuckles as he pulls a piece of spaghetti from the strand.

“So does that mean you’re going to let me escort you to your room, gorgeous?” he asks, raising a brow.

It feels like I’m broken from a trance as I take a step away from him and yet my heart is still beating rapidly in my chest. The urge to get closer to him is still strong but I choose wisely this time, moving away from him.

“You’ll threaten to smack me like the other bitches?” he asks in amusement.

“As it happens, I wasn’t following you, not at first,” he says, but he doesn’t elaborate any further. He turns, walking away and I only stare at him. He pauses, looking over his shoulder at me and raising a brow. “Are you going to come?” he asks and I realize he’s already walking in the direction of my dorm.

I move to catch up with him, keeping space between us as I fall into step behind him. He noticeably slows the pace of his long legs.

“You know, if you’re trying to convince me that you’re not stalking me, the fact that you know where my dorm is isn’t helping,” I tell him.

He peeks down at me, “And yet, you’re still following me.”

Conversation dulls as we walk the rest of the way to my dorm, but it’s surprisingly pleasant. I don’t feel any pressure to speak to him, nor is the silence awkward.

When we make it to my room, I find myself wishing the trip wasn’t over. After running into so many annoying, over chatty people, this guy is like a reprieve.

I lean against my door, one hand behind me on the handle as I look up at him. “I don’t believe I quite caught your name.”

“That’s because I didn’t give it to you, Nerrysa Ebirac.”

“Definitely a stalker then,” I mutter before raising my voice slightly, “because I definitely didn’t tell you mine either.”

“No, you didn’t,” he agrees, drifting close again.

“And you seem to have a problem with personal space as well,” I tell him as he twirls yet another lock of my hair. Thankfully, food doesn’t come with it this time.

His grin is ruthless and when he leans close to me, his breath fanning over my neck, I decide he just may be combustible. Because I’m on fucking fire.

His lips move so close to my neck that I can feel them brushing over my skin as he speaks. “I have a lot of problems to be honest,” he mutters, “but you may be my solution, little Nerys.” I have no idea what he means, but I really don’t give a fuck, feeling dizzy from his close proximity.

His fingers dance over my hip before suddenly he’s pulling away.

He takes a step back, eyes bright. “And my name is Brynsyn Challard,” he says before disappearing down the hall, leaving me confused and eerily enticed. 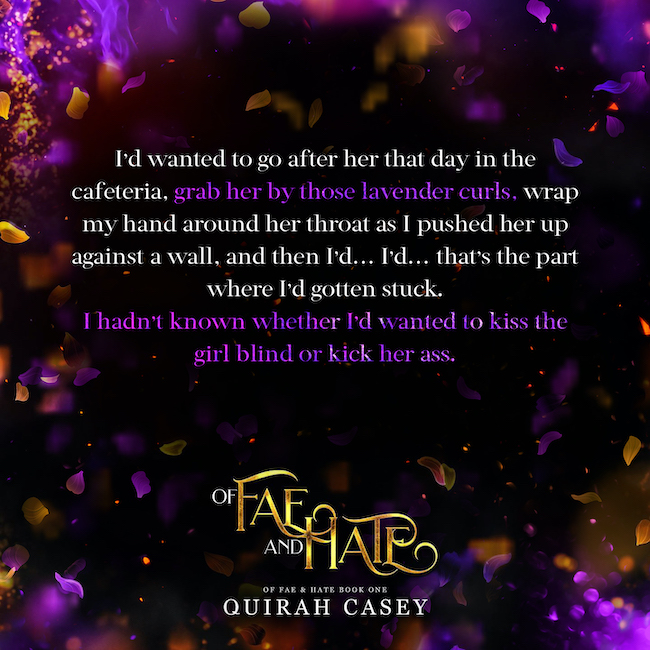 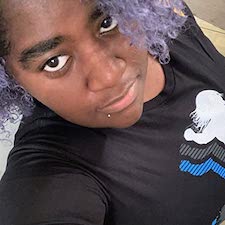 Quirah is still a new author, but not new to writing. She has been writing since the first grade, and has been winning awards since kindergarten, when she told her teacher about her trip to Chicago. Her teacher wrote down the story for her and she won the young authors contest at 5 years old! Quirah plans on working hard in the next couple of years to publish as many books as possible from her chöąts world.

In the meantime, catch up and follow Quirah online at the following links below.