Blog Tour, Character Guest Post, Review, & Giveaway for With a Spirit of Vengeance by Lena Gregory

A Day in the Life of Cass Donovan

I’m Cass Donovan, owner of Mystical Musings, a small psychic shop nestled between the beach and the boardwalk on Bay Island. Of course—just between us—I never thought I was psychic in any traditional sense. I always thought years of reading people, looking for those small tells that give away what they are thinking and feeling, allowed me to give fairly accurate “readings” and business was building up nicely. And then all of that changed, when I discovered I do actually possess the ability to “speak” to the dead. Now, both the living and the dead often seek me out.

And that’s a relief, because there’s no way I’m ever going back to my psychiatric practice in New York City. Returning home to Bay Island, a small Island between the north and south forks of Long Island, New York, is the best thing I’ve ever done. I often walk down the beach from my house to the shop with Beast, my hundred-plus-pound Leonberger. The feel of the sand between my toes, the soft breeze, and the salty scent of the sea have helped me to regain control of my life. I’ve even started dating Luke, a detective who moved to Bay Island to be close to me.

My friendship with Stephanie, my best friend from childhood, picked up as if I never left, and now I’ve also become close with her husband, Tank, and her four-year-old son. Then there’s Bee, who owns a designer dress shop down the boardwalk from Mystical Musings. He has become a good friend as well, the best actually. No matter what happens, he’s always there for me, even after the Ouija Board incident, which is saying a lot. We often hit the bakery, the diner, or the various fast food places together while Bee indulges in his favorite pastime, gossiping! And now that I’ve hired a part-time employee for the summer, life on Bay Island is just about perfect.

Until the day I have a “run-in” with Ophelia Wilson, and it turns out solving a current murder is not enough. Now, she wants me to delve into the past and solve a century old murder. And I have a feeling she’s going to hound me relentlessly until I do.

So, I guess I’m going to have to try to figure out who actually killed Ophelia’s parents and brother all those years ago. I have no other choice, really. And I’m pretty sure I can connive Stephanie and Bee into helping me.

About With A Spirit of Vengeance 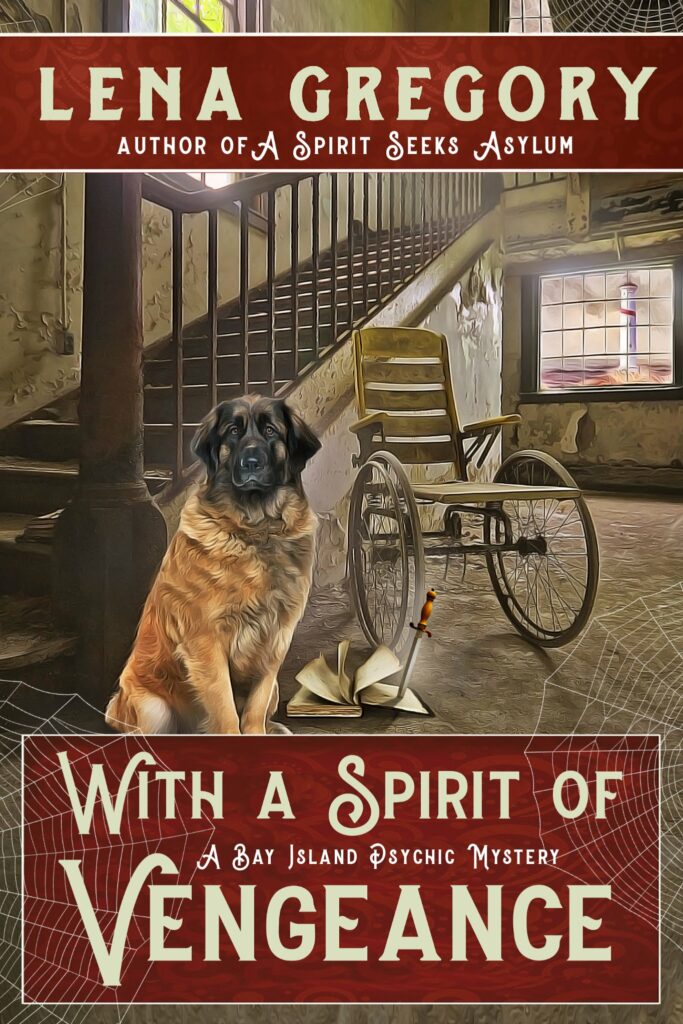 With A Spirit of Vengeance (A Bay Island Psychic Mystery)

Psychic Cass Donovan must uncover the truth about long-buried secrets and recent murders to bring peace to a troubled spirit and bring justice to a flesh-and-blood killer . . .

When the spirit of Ophelia Wilson turned to clairvoyant Cass Donovan for help, Cass was able to prove Ophelia’s innocence in the century-old murders of her family members—and solve a contemporary murder in the process. But Ophelia’s spirit has returned, this time angrily demanding that Cass expose the identity of whoever did kill her family. And then eerily, two descendants from the Wilson family tree are murdered, suggesting that Ophelia has the power to meddle in modern-day events to satisfy her rage.

As Cass struggles to solve the two recent murders and unravel the sparse clues about murders from a hundred years ago, she and those around her begin to suffer Ophelia’s wrath—including an attempt on the life of one of Cass’s closest friends. Relying on all of her own psychic powers, Cass has to confront the spirit’s hunger for vengeance and track down a merciless killer before she becomes the next victim of both . . .

I just love this series and this new installment is no exception. Cass has finally been able to hire someone to help out in her shop. Thea is doing a fabulous job helping out but things get a little dicey when Ophelia Wilson pops back up no longer happy with the outcome from the previous books. She is determined to find the real killer instead of just proving she didn't do it and to do so she goes to some extreme measures. Poor Thea just happens to be stuck in the middle of it all. Cass is having a hard enough time with this but when two recent murders happen as well she is stretched to the very limit. This makes for fast paced read that will keep you guessing at it all plays out making for quite the exciting read. It will keep you hooked from beginning to end. A must read for cozy fans. I totally loved it so I give it 5/5 stars.

Lena grew up in a small town on the south shore of eastern Long Island, but she recently traded in cold, damp, gray winters for the warmth and sunshine of central Florida, where she now lives with her husband, three kids, son-in-law, and four dogs. Her hobbies include spending time with family, reading, and walking. Her love for writing developed when her youngest son was born and didn’t sleep through the night. She works full-time as a writer and a freelance editor and is a member of Sisters in Crime.