1)     Tell us a little bit about yourself—both something we learn from Killers of a Feather and something that readers might not guess?

I’m Shell McMillan.  In a previous life, I played a spy on the highly successful TV series Spy Anyone. For reasons only the bigwigs will understand, the show got canceled, but honestly, I was starting to tire of the Hollywood scene anyway. Sadly, my Aunt Tillie passed away at the same time, leaving me not only her mansion in Fox Hollow, Connecticut, but also her business, the Urban Tails Pet Shop. Well, I know a sign when I see one, so without a second thought I packed up my bags and moved to Fox Hollow. Readers might not have guessed that my secret ambition was to someday own a pet shop!  (I do have a great love of animals, as evidenced by my two pets, a Siamese named Kahlua and a Persian cat, Purrday, which I also inherited from my aunt.) Readers will also learn in Killers of a Feather that my given name is Crishell, and I hate it! Especially when my mother calls me by that name!

T.C. and I have actually been together longer than most Hollywood marriages, mainly because she wrote my saga with me having several different careers!  I was always an actress, but it was what I did afterward that presented a challenge—until we finally hit on the pet shop!

T.C. is a dedicated individual who will keep going over and over a plotline until all the pieces fall into place! She also loves to imbue me and the other characters with qualities from people she knows (I like to think there’s a lot of T.C. in me!).

Probably because I’m a pretty interesting person LOL. And I’m certainly not afraid to take risks, which is the mark of a good amateur detective! Anyway, I’m Hollywood!  Where else would my life have ended up except being chronicled in a book?

I know everyone expects me to say Gary Presser, the Dr. Watson to my Holmes and my former costar on Spy Anyone, who currently lives in my house, cooks all the meals and helps me manage the pet shop (and solve mysteries!). Although we are the best of friends (even though my mother fancies it’s more than that), my favorite character has to be my one-eyed Persian, Purrday! He is a remarkable cat with a definite flair for detection.  (And he does remind me of a certain other cozy cat T.C. also writes about . . .)

I bet everyone thinks I’m going to say my mother, Clarissa McMillan, but that’s absolutely not true! I love my mother!  My least favorite character has to be Quentin Watson, the editor of the local paper. We got off to a rocky start in book One, The Time for Murder is Meow, and it hasn’t changed in Killers of a Feather. I greatly doubt that we’ll be best buds in any future books, either. It isn’t anything specific, it’s just . . . we’re like oil and water. We don’t mix.

I know T.C. is contracted for more books in the series, and there are so many stories to tell, so readers will get more adventures! After that . . . we’ll have to see! Readers’ reactions and word of mouth mean a lot, so if you enjoy our mysteries, spread the word!

About Killers of a Feather 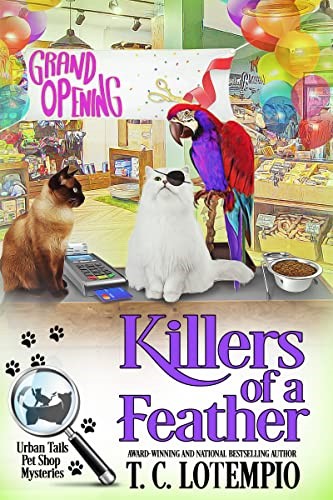 Shell McMillan and her feline friends must unravel a mystery where everyone’s a suspect and no one’s to blame . . .

With the grand re-opening of her Urban Tails Pet Shop just days away, Shell McMillan has her hands full planning entertainment for the festive event, including a fortune-telling parrot. But her jubilant mood is soon threatened by ominous rumors of the return of Johnny Draco, a former investment guru who swindled money from most of the residents of Fox Hollow and then vanished without a trace. And when the parrot predicts a dire future for Draco and his dead body is found just hours later, no one can say they’re surprised—but no one will say who did it.

With virtually everyone in town a suspect, the police turn their focus on a good friend of Shell’s who was seen arguing with the victim shortly before his death. Determined to clear her friend’s name, Shell begins investigating Draco’s past, his former employer, and everyone who lost money to him. And when the trail of clues suggests there may have been a completely different motive for the murder, Shell suddenly realizes she’s uncovered a secret someone would kill to keep hidden—and that if she’s not careful, the parrot may be predicting she has no future at all . . .

REVIEW
*I received a free copy of this book which I voluntarily chose to write an honest review for.
This is such a fun read! Shell is gearing up for the grand reopening of her Aunt's beloved pet store. She has a huge event planned with all the other businesses getting involved. Things are great until a !an from the past shows up unexpectedly. He took off years ago after lots of them invested money with him and lost it. Obviously he is not well liked but when he turns up dead everyone is a suspect. This creates quite the mystery as Shell looks for clues even putting herself in danger. Add in the adorable pets (a fortune telling parrot is such a hoot) to get a book you won't be able to put down. A must read for pet lovers as well as cozy fans. I totally loved it so I give it 5/5 stars. 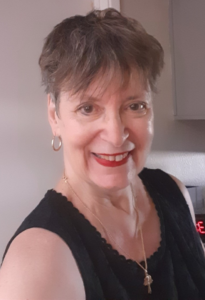